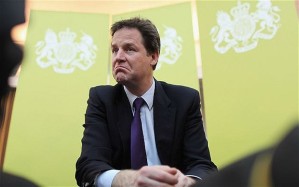 The Lib Dems just can’t help themselves. As soon as they see something which they view as ‘unfair’, their first and immediate instinct is to legislate against that perceived ‘injustice’. So, when Nick Clegg notices that the privileged and privately educated offspring of wealthy parents (people like him, as it happens) bag most of the top internships, he immediately rushes out to condemn “the sharp-elbowed and the well-connected” who, apparently, have somehow conspired to destroy the aspirations of the less well-off in society. This, for those of you who tend to change the channel whenever our Deputy Prime Minister hoves into view, is what Mr Clegg had to say about internships:

“For too long, internships have been the almost exclusive preserve of the sharp-elbowed and the well-connected. Unfair, informal internships can rig the market in favour of those who already have opportunities. We want a fair job market based on merit, not networks. It should be about what you know, not who you know. A country that is socially mobile bases opportunity on your ability and drive, not on who your father’s friends are.”

More recently, Simon Hughes, the Lib Dem MP who, inexplicably,  has been turned into some kind of ‘Access Tsar’, has called for Oxbridge interviews to be scrapped to make the system ‘fairer’. In an interview with the Times, Hughes claimed that the trouble with interviews is that they enable candidates to ‘bond’ on an intellectual level with the tutor who will teach them, thereby disadvantaging other candidates.

Now, I should add that I have no doubt that these two men are acting from the purest of motives. They quite clearly only wish to help the least fortunate members of our society. They are certainly not trying to make amends for their spectacularly unpopular U-turn on tuition fees earlier this year, which resulted in the party’s poll ratings falling off the edge of a cliff. Perish the thought. However, even if we assume that the Lib Dems mean well, what should we make of the substance of what they are proposing?

To my mind, the proposals are hopelessly misguided. Even if you forced employers to pay all their interns and even if you made it mandatory to advertise all internships publicly, the most sought after placements would still go those with the right connections. There are those who would like to portray this as some kind of sinister ‘Old Boys’ plot designed to ensure that the children of the Establishment always monopolise the best jobs. The truth is much simpler than that. It is a basic law of human nature that people are keen to help their friends and family members. We perform favours for others and we often expect favours in return. It may be news to the Lib Dems, but that is how the world works and, as much as they would like to, you cannot legislate against human nature.

Moreover, this social phenomenon takes place across all levels of society. For every banker who hands an internship to a friend’s daughter, there will be a builder on a construction site who secures a job placement for his son. Of course, this side of the equation is rarely if ever mentioned.

Simon Hughes, meanwhile, believes that Oxbridge tutors should be “absolutely removed” from the admissions process. His argument, essentially, is that it is wrong for tutors to form intellectual relationships with certain candidates. Perhaps I have failed to grasp the point of a university education based on a tutorial system, but has it never occurred to Mr Hughes that the formation of an ‘intellectual bond’ is, in fact, at the very root of a healthy relationship between a tutor and an undergraduate? This bond may be of little consequence in the context of a lecturer addressing a hall packed with hundreds of students, but it most certainly matters very much in the intimate environs of the one-to-one Oxbridge tutorial.

Also, if you were to follow Mr Hughes’ argument to its logical conclusion and extend it to other similarly competitive areas, what would stop us from banning job interviews? Would it not be ‘fairer’, according to Mr Hughes, if job applicants were simply judged on the basis of their CVs? Of course it would not. The truth is that for any highly sought after position, whether it be a place at Oxbridge or a job at a corporate law firm, there will be many candidates with almost identical paper qualifications. The only meaningful way to distinguish between similarly qualified candidates is to meet them face-to-face in an interview and to see how they perform under pressure. That Mr Hughes cannot grasp this seemingly basic point is extraordinary.

The real sadness in all of this, however, is that Clegg and Hughes are not focusing on the real barriers that are preventing young people from less wealthy or well-connected backgrounds from achieving their potential. Rather than bleating about internships and interviews, the Lib Dems (in conjunction with their coalition partners) ought to set their sights on improving the standards in our primary and secondary schools. They should look again at the difficulties besetting parents looking for good state nursery schools, given that a bad start in life can often have a hugely deleterious effect on a child’s future prospects. Above all, they should reconsider the option of re-introducing selection by ability across our state schools. There are countless studies that show how the decline in social mobility in the UK can be linked to the gradual destruction of the grammar schools system. In short, focusing on internships and interviews will, perhaps, appease a few Liberal consciences, but it will do nothing for those from less privileged backgrounds.

« Sweden: No gender in the classroom
Is Obama playing games with security to win re-election? »