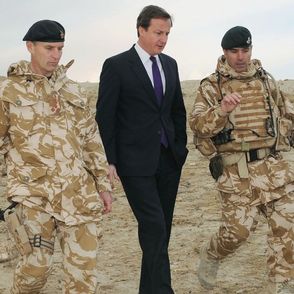 Military cuts have gone too far

Is the news today that the Army will receive cuts of another 7,000 men above the Strategic Defence and Security Review (SDSR) a sign that things are going too far? With criticism and warnings coming from across the military hierarchy, will Mr Cameron and his government realise their mistakes, asks J. Britain?

When the SDSR was originally announced, it came under intense criticism. The loss of Britain’s only operational aircraft carrier, the entire Harrier fleet gone and cuts to vehicle numbers in all three forces are just a few of the major changes made to the armed forces. It is not all bad, as the Territorial Army (reservists) will be receiving more money. Also, the military covenant has been enshrined into British law, offering more support for ex-forces members. All of this is being done to cut down on the MoD’s large deficit which built up mostly under the previous Labour government, launching Britain into two long term conflicts that she was not prepared for.

Minus the deficit cutting, the other main argument that the government are trying to present for these large cuts is that Britain needs to shift away from ‘Cold War thinking’. This doesn’t wash. Yes, we are less likely to end up in a ‘set piece battle’ situation than twenty to thirty years ago, but that doesn’t mean the threat isn’t there. Outside of a constantly weakening NATO and militarily weak West, other nations are growing stronger. Russian aircraft are constantly patrolling the Northern borders of Britain’s airspace now, testing her defences just as they did in the Cold War era. Just because Britain’s out of Cold War mode, doesn’t mean everyone else is. Also, the Chinese are ever expanding both economically and militarily, and they may end up being a threat to Western security sooner rather than later.

It seems Britain’s leaders are thinking very short term in their military spending, although the previous government were worse, making it impossible to cancel the two new aircraft carriers. This presented the coalition with the ‘only option’ of mothballing one of the two. I’d have kept the Ark Royal and her Harriet fleet in service until she could be replaced by one of the new classes of aircraft carrier; and only then considered scrapping her. Or maybe even keeping her in service afterwards. We are an island nation, and therefore a strong navy should be an essential part of our defence make up. Right now, senior naval officers feel they can only protect our home waters, and no more. ‘Britannia rules the waves?’ It would seem not.

With this move from ‘Cold War thinking’, the Royal Navy find themselves without an aircraft carrier. Yet in our current operations in Libya, launching aircraft from the Ark Royal stationed a few miles off the Libyan coast would reduce fly time to the country to twenty minutes from ninety. As well as saving fuel costs, this would allow more sorties to be flown a day, and further keep up the pressure of the campaign. The entire Nimrod fleet was also due to be cut under these measures, but now one is being kept in service for use in Libya.

Wouldn’t it make more sense to have kept this fleet in operation as they have a clear purpose on today’s battlefields? Why do successive British governments place our armed forces into military conflicts after making cuts to them only months before?

Another element of the SDSR was to cut Britain’s number of Challenger II tanks, as it was felt they had less use in today’s conflicts. A serving soldier told me ‘If you turn up to a roadblock in an army Land Rover, the locals will throw stones and other objects at you. If you turn up in a Challenger II, they tend to show you some respect’. The age of the tank leading the charge may have ended, but that does not mean it is without use. As a protective vehicle, both of bases, patrols and convoys, the tank still excels. As a morale boost, the tank will help. Strongholds will need to be cleared, areas cleared. Tank to tank fighting may not be its primary role anymore, but that certainly doesn’t mean it is without use.

The departing American Defence Secretary Robert Gates openly criticised the NATO alliance, saying how ‘the US won’t hold it up forever.’ The current US administration wants to see more done by their European partners, Britain included. Yes, Britain may spend the required amount of GDP on defence that NATO asks for, but it has very little to show for it.

The recent attacks in Norway show how terrorism can rip a country apart, and pose the question: is Britain really prepared for this sort of attack? There is evidence to suggest that an attack similar to the Norway one, or the killing spree in Mumbai, could be repeated in London. Many question the British ability to respond to this.

If Britain wishes to keep up its military role in world affairs, then more spending in defence is needed. Not just for foreign conflicts, but for problems closer to home as well. Violence is increasing again in Northern Ireland, and if the terror threat level increases, more troops will need stationing at home. Or what if the Argentinians decide to take another shot at the Falklands? It has already been said the Royal Navy hasn’t got the ability to take them back if they are invaded, and Britain would find it difficult to fight in three conflicts at its current strength.

In my previous article I talked about the problems related to the Afghan hand over plans. If these go wrong, then Britain will be remaining in Afghanistan for even longer, undoubtedly ruining some Ministerial plans that will make the SDSR cuts viable. Maybe we will even be drawn into another conflict, whether it is Northern Ireland, the Falklands or wherever. What will Britain do then? It’s time the British government realised they can’t plan for everything, and that defence cuts have gone too deep and too far. Are my visions of the future too pessimistic and too far-fetched? Let’s hope so, for the sake of our nation and our armed forces.

politicsontoast.com
View all posts by jbritain »
« A Very British Problem: The High-Speed London to Birmingham Line
The end of integration – Europe in retreat »