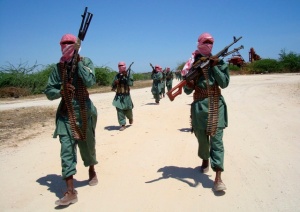 With the American debt crisis dominating most of the front page headlines at the beginning of the week followed by a dramatic slide in major stock markets you may have been fortunate enough to avoid stories involving Newcastle’s Joey Barton quoting Nietzsche and a Polar bear killing a school boy on an expedition in Norway but amongst this detritus, Harry Raffal reports five of issues which have been left knocking around.

One: The Islamist group al-Shabaab have withdrawn from Mogadishu in what has been described in many news agencies as a defeat stemming from diminishing aid from Arab countries. However, al-Shabaab have proven themselves surprisingly organised and resilient in the past and even if the withdrawal stems from setbacks received at the hands of African Union forces they may well prove capable of responding in a dynamic and innovative manner. If Al-Shabaab is changing tactics it is likely a consequence of recent developments which have seen them making less impact on the distribution of aid than originally feared, indeed at this point it is delays in the provision of food aid which is slowing relief efforts not the work of the militants. Quite possibly al-Shabaab, whose regular core is quite small but can be supplemented by local clans in certain areas, is falling back into its heartland in order to exert a more focused response to the current situation in south Somalia. Given the African Union forces in Mogadishu do not have the numbers available to fully exploit the withdrawal we may well see al-shabaab return at a later date. In the meantime they will hope that scenes witnessed last week of different factions in Mogadishu trying to seize UN aid, a picture familiar to that seen in 1992 in what ultimately led to US involvement, will be repeated. This all comes in a week where here at home polls have suggested the majority of public opinion is against the government’s current commitments to providing foreign aid.

Two: More fallout from the news strategic defence review to be considered in a week where it was also announced that British tours of duty in Afghanistan could be doubled to a year. The Defence Select Committee has suggested that there will need to be increases to the armed forces budget if the aims of the defence review are to be achieved; a position Nick Harvey the Armed Forces Minister recently agreed with. In a recent report the Defence Select Committee argued that “We are not convinced, given the current financial climate and the drawdown of capabilities arising from the Strategic Defence and Security Review, that from 2015 the Armed Forces will maintain the capability to undertake all that is being asked of them.” The committee also stated that “The Prime Minister’s view that the UK currently has a full spectrum defence capability is rejected by the committee.”The report’s conclusions largely bear out the position of the heads of the Royal Navy, RAF and British Army regarding the degrading of the military due to cuts in the defence budget which Mr Cameron flatly rejected when speaking to the committee in May of this year. Meanwhile Dr Fox has continued parroting the line that Britain has the fourth largest military budget despite the mounting criticism from all quarters. One is left wondering what this government believes the main purpose of the defence policy is. Is it to protect Britain? If so from who or what are we to be defended? Is it to police the world? If so how often an should we be able to conduct operations simultaneously? Or is it to convince us all that we are defended, able to police the world and provide a visible presence of our influence on the world stage? Unfortunately no matter what your own answer is you will almost certainly be disappointed by the current government’s policy and there are signs that back bench MPs are becoming unhappy as well.

Three: Sticking to news in the defence world but happily involving the Liberal Democrats and a decision which has led to bitter animosity between two of its leading figures. Sir Menzies Campbell has essentially accused Danny Alexander of improperly using his influence in the coalition to secure the future of RAF Lossiemouth and ensure that RAF Kinloss will be turned into an army base. Both are located near Mr Alexander’s own constituency with many of his constituents directly employed by the bases. At the outset of the base review last November Sir Menzies is thought to have received assurances that RAF Leuchars, located in Fife near Sir Menzies constituency, was safe and would not be closed. However, Mr Alexander later told lobbyists that he had used his position to make a Treasury case for keeping RAF Lossiemouth and closing RAF Leuchars instead. An impartial assessment of the best location strategically for an RAF base in Scotland, if a base for the RAF in Scotland is needed at all, would almost certainly of had to fall in favour of RAF Leuchars which provides a better intercept point and the ability to meet a potential threat at a greater distance off coast whilst also providing full cover of the north.

Four: Plans to build an offshore wind farm in Aberdeen Bay may face a serious legal battle as one resident objects the proposed wind farm will spoil his view. That resident would be a Mr D. Trump. The US Tycoons current golf course development, spanning over 1,200 acres, is accused by many, including local residents, of destroying an area of special scientific interest and defiling an area of exceptional natural beauty. However, the Trump Organisation see no irony in their threat to use any legal means to preserve the view of their five star resort and golf course and halt the installation of the wind farm. The proposed wind farm has already been reduced in size, down to 11 turbines, after safety objections from Aberdeen heliport and shipping agencies were received during the consultation process. Trump’s objection is unlikely to be successful as the wind farm is supported by the Scottish government, the company involved is part owned by the Aberdeenshire Council and the wind farm is regarded as a key part of the government’s aim for 7,000 off-shore wind turbines. The threat of a prolonged legal battle and expenses may, however, be sufficient for Mr Trump to secure more considerations from the local council during his ongoing development.

Five: In the health sector there has been good news concerning MRSA with infection rates falling to their lowest levels since records began. Less than 100 cases of MRSA were reported in a single month in NHS trusts across England. Clostridium difficile, which can lead to Pseudomembranous colitis are a cause of anti-biotic associated diarrhea and if left untreated can progress to the life threatening toxic megacolon, levels are also dropping as part of a general downward trend. This news comes as the ongoing legal battle between government and 3M progresses. 3M are accused of failing to carry out plans to sell a new test method of MRSA to UK and European hospitals and failing to carry out the tests necessary to gain regulatory approval in the United States.

Historian at the Royal Air Force Museum. Currently preparing for the viva defence of my PhD thesis on the RAF and Luftwaffe during Operation DYNAMO, the evacuation of the Dunkirk in 1940 (University of Hull). Other areas of research include: The online development of the Ministry of Defence and British Armed Forces. 2014 — Institute for Historical Research research bursary for ‘Big UK Domain Data for the Arts and Humanities’ project. 2018 — published in a special issue of Internet Histories. https://doi.org/10.1080/24701475.2018.1456739 The force structure and capabilities of the Eritrean Air Force Internet deterrence: How to counter the weaponization of information online These research projects have formed the content of several papers including lectures to the Royal Aeronautical Society, as part of the RAF Museums Trenchard lecture series, and the 2017 Research Infrastructure for the Study of Archived Web Materials (RESAW) conference. This research has been funded through bursaries and educational grants from the Royal Historical Society, the 2014 Big UK Domain Data for the Arts and Humanities research grant, the Princess Royal Trust, the University of Hull, the Sir Richard Stapley Trust and the RAF Museum PhD bursary. Placed in Total Politics 2011 top 100 non-aligned political bloggers
View all posts by Harry Raffal »
« The continuing and unsuprising crisis of capitalism
Riotous hyperbole »