The mansion tax has raised its head again

With the riots consuming most of the newsprint and dominating the airwaves, you may not be aware that Bolton are sitting pretty at the top of the Premier League. Harry Raffal brings you the other storylines that may have slipped your notice.

With the riots in Britain and the subsequent political fallout occupying central stage this week and only broken to bring us the first week of the Premier League and England thrashing India to go 3-0 up in the series, END_OF_DOCUMENT_TOKEN_TO_BE_REPLACED

If I were appointed Health Secretary tomorrow… 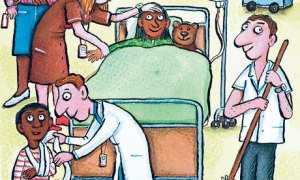 Politics On Toast’s very own A.P. Schrader has been appointed health secretary by Her Majesty’s Government  (yes, really). In his first act he abolishes the Department of Health. Next he razes and rebuilds the National Health Service – one that will compete for our business.

What would I do if David Cameron appointed me Health Secretary tomorrow? I dare say Andrew Lansley still asks himself that question every night before he goes to bed. Or does he? Jacqueline Davis of The Guardian would have us believe that the Coalition’s apparently Lib Dem-led U-turn “was a fake” and that the Lansley reforms “remain on track”. We can only hope. Even if they are, however, I have serious doubts as to whether the Lansley proposals go anything like far enough, even in their un-watered END_OF_DOCUMENT_TOKEN_TO_BE_REPLACED